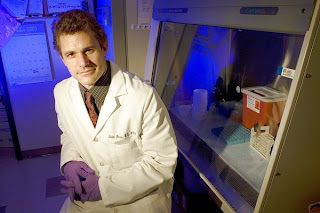 The evolution of AIDS from a deadly disease shrouded in fear to a largely manageable condition took another step forward Monday, when San Diego researchers unveiled results of a study looking at an early-detection method for the virus that causes the illness.

The report’s authors said a rarely used blood test can spot HIV weeks before the body recognizes the infection. They recommended that it be offered along with the more common screening method to people at high risk of contracting the virus, including gay men, intravenous drug users and people with multiple sex partners.

Among the 3,151 participants in a two-year study, the blood test identified HIV in 15 individuals who had falsely tested negative with the traditional saliva swab procedure.

False negative results occur in as much as 1 percent of those who take the swab test, which pinpoints antibodies produced by the immune system in response to infection. It can take as long as three months for the body to begin producing enough antibodies to trigger a positive reading.

During that lag time, people can unknowingly spread HIV through unsafe sex and miss early treatments that could improve their health in the long run, said Dr. Sheldon Morris, an AIDS researcher at the University of California San Diego’s Antiviral Research Center in Hillcrest.

Morris was lead author of the HIV-testing report, which appeared Monday in the journal Annals of Internal Medicine. His colleagues included other researchers from UCSD and San Diego County’s HIV, STD and Hepatitis Branch.

“If people got an antibody test alone and were told they weren’t infected when they were, they could be a strong infection risk until they get tested again, which according to guidelines could be six to 12 months later,” Morris said.

The latest findings reinforce similar conclusions from a 2005 study led by scientists at the University of North Carolina. Those researchers administered the early-detection blood test to a much larger sampling of people.

Participants in the San Diego study whose blood tested negative could get their results in person, through an automated telephone system or by logging on to a secured website. About 65 percent of those who sought their results used the automated options.

Morris said the pattern demonstrates a shift in attitudes about AIDS. The illness once was viewed as a death sentence that needed in-person counseling to deal with issues such as shame and secrecy. But advances in detection and treatment have turned it into a chronic, controllable condition for most patients — not unlike diabetes.

“HIV is not as mysterious as it once was,” Morris said.

The early-detection blood test, which homes in on nucleic acid RNA molecules produced by the virus, has been used to screen most of the nation’s blood donation supply since 2002, according to its maker, Gen-Probe of San Diego.

The FDA approved the test for use as an HIV diagnostic tool in late 2006, but its cost — as high as $100 — and more complicated administration have helped discourage widespread use, said Rowena Johnston, vice president and research director of the New York-based international HIV/AIDS research foundation known as AMFAR.

Samples for the blood test are obtained through finger pricks and must be sent to a laboratory, which can take up to two weeks to return results.

“The reason the antibody test is (widely) used is because of low cost and convenience,” Johnston said. The saliva swab method can produce a reading within a few minutes.

But identifying people with HIV within a few days or weeks of infection has become a public health imperative, in part because the virus level tends to be highest during the early infection stage — making transmission to others more likely, she said.

“This really is a key to preventing HIV transmission,” Johnston said.

Because of the blood test’s cost, health experts said, it probably isn’t practical to offer the higher-level screening to the general population. It makes more sense to focus on high-risk HIV groups because they record larger numbers of false-negative antibody test results.

In the San Diego study, participants were recruited from several HIV testing sites in the region, including those run by UCSD, the county and the Lesbian, Gay, Bisexual, Transgender Community Center.

Each participant was given the saliva swab test, and then blood samples were taken from those who tested negative. The samples were sent to labs in San Diego and Emeryville in the Bay Area, where they were analyzed for HIV nucleic acid. Patients who tested positive for HIV after the blood analysis received the results from clinic staffers within a week.

Morris said the blood test is sensitive enough to detect the virus components within 10 days of infection.

“I think the time is coming where we will have to adopt a strategy for earlier (HIV) detection,” he said. “If you have a testing site with a high-risk prevalence, then you probably should be running this test on all of their samples” that tested negative for virus antibodies.

Watch HIV scientists Dr. Niel Constantine and Robin Weiss talk about the accuracy of HIV Testing.
House of Numbers Anatomy of an Epidemic at 1:13 AM No comments: