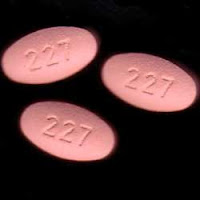 Some medications already being used to treat HIV appear to inhibit a retrovirus that has been linked to prostate cancer and chronic fatigue syndrome, reports a new study published online April 1 in PLoS ONE.

Like HIV (human immunodeficiency virus), XMRV (xenotropic murine leukemia virus-related virus) is a retrovirus that infects host cells with its RNA through reverse transcriptase enzymes, using protease enzymes to process proteins for viral assembly and integrase enzymes to help infect the host cell's DNA. Many of the drugs approved to treat HIV target one of these processes to slow or prevent host cells from becoming infected.

After testing 28 approved drugs on XMRV cultures, researchers found that four of the medications (raltegravir, L-000870812, Zidovudine (AZT) and tenofovir disoproxil fumarate) were able to stop XMRV from replicating. Two of the drugs are reverse transcriptase inhibitors, and the others (including raltegravir, which worked the best) are integrase enzyme inhibitors.

In addition to the similar success of the drugs' compounds, the researchers found that the use of the antiretrovirals might do well to follow HIV treatment protocol, in which multiple treatments are often used together. "These drugs inhibited XMRV at lower concentrations when two of them were used together, suggesting that highly potent 'cocktail' therapies might inhibit the virus from replicating and spreading," Raymond Schinazi, a professor of pediatrics and chemistry at Emory University's Center for AIDS Research, said in a prepared statement. "This combination of therapies might also have the added benefit of delaying or even preventing the virus from mutating into forms that are drug-resistant."

XMRV is one of only a few retroviruses known in humans and was found in 2006. Since then, some studies have found a correlation between it and some forms of prostate cancer (which is the second most common cancer among men) as well as chronic fatigue syndrome (estimated to affect four to 10 people per thousand). Other studies have had mixed results, so the implications of the results hinge largely on future findings about this retrovirus's role in human disease. "It is not yet clear if any illnesses are directly caused by XMRV," the researchers wrote in their study. But "our data indicates that XMRV infections might be prevented or treated with specific antiviral agents."

And if the retrovirus does prove to play a role in causing illnesses, the findings could help in designing clinical trials to test the treatments in vivo.

In the meantime, Ila Singh, an associate professor of pathology at the University of Utah School of Medicine and lead author on the new study, concluded in a prepared statement that, "These results offer hope to infected persons."
House of Numbers Anatomy of an Epidemic at 4:58 AM No comments: