MIAMI, April 13 (Reuters) - A Miami man has pleaded guilty to a Medicare fraud scheme that sought to cheat the U.S. healthcare system out of more $60 million, authorities said on Tuesday.

The U.S. Attorney's Office for the Southern District of Florida said Ihosvany Marquez confessed to overseeing a criminal operation that submitted at least $61 million in false claims to Medicare for the treatment of patients with HIV, AIDS, cancer and a variety of other ailments at eight Miami and Orlando-area health clinics.

Medicare, the federal health insurer for more than 43 million elderly and disabled Americans, paid nearly $24 million of the bogus claims.

The returns were so good that Marquez -- a former high school pitching ace who went on to have a short-lived career in minor league baseball -- spent millions of dollars on jewelry, watches, luxury cars and race horses, according to court records.

As part of his plea agreement, he admitted to laundering the healthcare fraud proceeds through a Miami-area car dealership and through two Miami check cashing stores, Pelly Box Lunch and La Bamba Check Cashing, authorities said.

He and an unidentified number of co-conspirators, all of whom were indicted separately, concealed their involvement in the scheme by recruiting nominee or "straw" owners for each healthcare clinic they operated, the U.S. Attorney's Office said.

It said the nominal owners, mostly from the closely knit Cuban immigrant community, were paid large sums of cash to sign corporate and bank records and other documents before fleeing the country to avoid arrest.

Florida, where healthcare fraud has replaced the drug trade as the crime of choice among many felons, has long been has long been known as the capital of Medicare fraud.

The cases often involve multimillion-dollar schemes featuring bogus suppliers of durable medical equipment such as wheelchairs and sham infusion therapies for the treatment of HIV and AIDS. (Reporting by Tom Brown; Editing by Cynthia Osterman)
House of Numbers Anatomy of an Epidemic at 8:25 PM No comments:

Lady Gaga Says She's Celibate And Fans Should Be Too 'I can't believe I'm saying this — don't have sex,' singer says.

Forget that ride on the disco stick ... at least for now. That's the message Lady Gaga is sending to her fans, telling them that they should follow her example and live a celibate lifestyle. 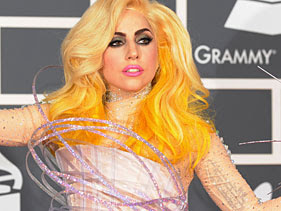 The 24-year-old singer who's made a career with songs that glorify carnal pleasures told London's that she is currently under a self-imposed sex ban and that others should consider a similar posture. "I can't believe I'm saying this — don't have sex. I'm single right now and I've chosen to be single because I don't have the time to get to know anybody," she said while visiting England to help promote MAC's Viva Glam campaign, which supports global HIV and AIDS projects. "So it's OK not to have sex, it's OK to get to know people. I'm celibate, celibacy's fine."

Gaga said her celibacy is something she wants to "celebrate" with her fans, extending her oft-repeated message to her "little monsters" that they should be secure in their own skin and not shy away from being different.

"It's OK to be whomever it is that you want to be," she said. "You don't have to have sex to feel good about yourself, and if you're not ready, don't do it. And if you are ready, there are free condoms given away at my concerts when you're leaving! ... I remember the cool girls when I was growing up. Everyone started to have sex. But it's not really cool anymore to have sex all the time. It's cooler to be strong and independent."

Part of the reason Gaga said she was sending the celibacy message was because of the steady rise in the rate of HIV infection among women worldwide, which has grown while the overall rate among men has continued to decline.

"The rate of infection worldwide is higher than ever for women in our particular demographic," said the singer, referring to women aged 17-24 and 38-56, the bracket of her partner in the campaign, 56-year-old '80s pop star Cyndi Lauper. "Part of the problem is that women in those groups are not getting tested. ... This is a disease that affects everyone, not just the gay community, and right now it's mostly affecting women."

Gaga realizes that her fans idolize her, as evidenced by the legion who arrive for her concerts dressed in Gaga drag and who post countless homages to her high-concept videos online. "When you're in the public eye, you're a role model whether you want to be or not. And I want to be," she said. "I'm not one of those self-obsessed artists who don't care about their fans. It's not just about the music."
House of Numbers Anatomy of an Epidemic at 12:07 AM No comments: