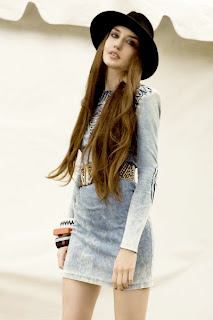 Inspired by the summer festival season, H&M is launching it's third Fashion Against AIDS! campaign with a collection of rock and roll summer styles, with 25% of the proceeds going to youth HIV/AIDS awareness projects.

"It is very important to make people aware of the problem with AIDS and HIV and we want to contribute in the fight against the disease by donating some of the sales from this collection,” says Ann-Sofie Johansson, H&M’s head of design, in a press release.

And for guys who want to look like they're in the band, the boy's collection offers slim blazers and jackets, faded and patched denim jeans and cropped shorts, embellished waistcoats, paisley vests and the "essential rocker’s hat."

Of course if your headed out to a summer music festival, your going to need supplies for camping out. For this reason the collection offers rocker-chic tents, sleeping bags and folding chairs, along with guys and gals themed toiletry kits.

Born to rock but sticking close to home this summer? The collection offers a quartet of headphones in vibrant patterns and colors so you can rock out even if your not at a hot concert.

Hitting stores May 20th and priced from just $2.95 to $79.95, the Fashion Against Aids! collection allows you to give back at a bargain price.
House of Numbers Anatomy of an Epidemic at 11:31 PM No comments: 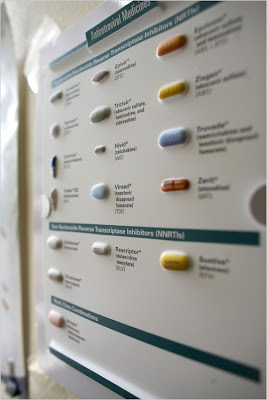 In a major shift of H.I.V. treatment policy, San Francisco public health doctors have begun to advise patients to start taking antiviral medicines as soon as they are found to be infected, rather than waiting — sometimes years — for signs that their immune systems have started to fail.

The new, controversial city guidelines, to be announced next week by the Department of Public Health, may be the most forceful anywhere in their endorsement of early treatment against H.I.V., the virus that causes AIDS.

Ever since combinations of antiviral drugs were found to slow progression of the disease in the mid-1990s, doctors and patients have wrestled with the question of when to begin a lifetime regimen of costly and sometimes toxic medicines. The answer remains in dispute, but public health leaders here are now making a case for a change.

Behind the policy switch is mounting evidence that patients who start early are more likely to live longer, and less likely to suffer a variety of ailments — including heart disease, kidney failure and cancer — that plague long-term survivors. Studies suggest that in the early years of infection, when a patient may show few signs of immune system failure, the virus is in fact causing permanent damage that becomes evident later.

For instance, in older patients who finally start taking the drugs, the effects of chronic inflammation take their toll.

“The impact on health risk is comparable to that of diabetes,” said Dr. Steven G. Deeks, a researcher at the University of California, San Francisco. “Their immune system may look like that of someone 30 years older.”

Dr. Diane V. Havlir, chief of the H.I.V./AIDS division at San Francisco General Hospital, said the new policy was already in effect for her patients. Although a decision whether or not to take the medicine rests with the patient, all those testing positive for H.I.V. will be offered combination therapy, with advice to pursue it.
“The history of H.I.V. disease has always been about change,” she said. “We pride ourselves on working quickly with new data.”

At the public hospital’s H.I.V. clinic, a 30-year-old man is mulling advice from Dr. C. Bradley Hare to start on antiviral drugs. He was infected four years ago, but his T-cell count, a measure of infection-fighting white blood cells, is 735, comparable to that of an uninfected, healthy adult. He is buff and athletic and feels good.

The man has decided to keep waiting. “Once you start the drugs, you can’t stop,” he said. “You know how they say, ‘If it ain’t broke, don’t fix it?’ ”

Dr. Hare has been following research on early treatment, and for the last several years he has asked his patients to think about it. Now, he is recommending it outright. He said most of his patients did not have serious problems with drug side effects. “A lot of times they have a sense of relief when they start the meds,” he said.

The turning point in San Francisco’s thinking may have been a study in The New England Journal of Medicine on April 1, 2009, that compared death rates among thousands of North American H.I.V. patients. Dr. Mari Kitahata, an epidemiologist at the University of Washington, and her team of researchers found that patients who put off therapy until their immune system showed signs of damage had a nearly twofold greater risk of dying — from any cause — than those who started treatment when their T-cell counts were above 500.

There is another motivation prompting the change. Reducing the level of virus in the population of infected people may reduce the spread of the disease.

“I do anticipate it will drive down the rates of new infections,” Dr. Mitchell H. Katz, San Francisco director of public health, said. “It’s a nice, secondary benefit of this new policy.”

Dr. Katz said that despite cuts in health budgets, a policy to add to the number of H.I.V. patients taking expensive drugs made economic sense. “H.I.V. medications have been continually proven to be cost effective,” he said, “and in this case, it is also the right thing to do.”

The program is being carried out without a clear picture of its cost to city and state health agencies. Antiviral drugs can cost $12,000 a year, consuming $350 million of the budget of California AIDS Drug Assistance Plan.

Dr. Michelle Roland, chief of the state’s Office of AIDS, said she and her counterparts across the country were working with the Centers for Disease Control and Prevention to estimate the added cost of early treatment.

In San Francisco, up to 2,000 people know they are H.I.V. positive, have healthy T-cell counts and are not yet on treatment, according to the city. Cost estimates are complicated by unknowns, like the number of patients choosing to participate, how close they were to needing treatment under the previous system and whether they had private insurance.

When the first combinations of AIDS drugs came out in 1996, the thinking was “hit early, and hit hard.” But as patients battled nasty side effects, like diarrhea and disfiguring shifts in body fat, therapy was deferred until T-cell counts fell as low as 200.

Today, with safer drugs, quick viral suppression is back in fashion.

“The field is moving, inexorably, to earlier and earlier therapy,” said Dr. Anthony Fauci, director of the National Institutes for Allergy and Infectious Diseases. He called San Francisco’s decision “an important step in that direction.”
But the proposal is highly controversial, even in San Francisco. “It’s just too risky,” said Dr. Jay Levy, the U.C.S.F. virologist who was among the first to identify the cause of AIDS. The new drugs may be less toxic, Dr. Levy said, but no one knows the effects of taking them for decades.

San Francisco’s decision follows a split vote in December by a 38-member federal panel on treatment guidelines. Only half of the H.I.V. experts gathered by the Department of Health and Human Services favored starting drugs in patients with healthy levels of more than 500 T-cells.

One panel member, James D. Neaton of the University of Minnesota School of Public Health, contends that a rigorous, randomized clinical trial is needed to show whether early intervention works. The risks of early treatment — giving powerful drugs to people at low risk of disease — - could outweigh the “modest predicted benefit,” Dr. Neaton wrote in an e-mail message. “That is why we do randomized trials.”

In 2009, the University of Minnesota began a study to find that proof. Results are expected in 2015.
Dr. Lisa C. Capaldini, who runs an AIDS practice in the Castro district, also has strong reservations. “H.I.V. behaves differently in different people,” she said.

Although Dr. Capaldini recognizes that today’s drugs are a vast improvement over earlier therapies, the program, she said “is not ready for prime time.”

But the changes make sense to Dr. Stephen Follansbee, director of H.I.V. Services for Kaiser Permanente in San Francisco, who oversees a program that covers 2,100 people with the virus.
“The idea of living in happy symbiosis with this virus is delusional,” Dr. Follansbee said. “If you have a fire in one part of the house, but not in the living room, you don’t wait for it to reach the living room before you call the fire department.”


A version of this article appeared in print on April 4, 2010, on page A25A of the National edition.

House of Numbers Anatomy of an Epidemic at 4:07 PM No comments: