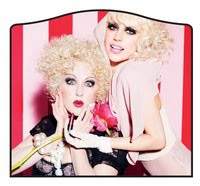 Meet the new voices of Viva Glam, Lady Gaga and Cyndi Lauper. They love lipstick, they love fashion, and they want to tell girls all over the world how to keep their love life safe, seductive and satisfying with eyes wide open to the facts about women and HIV/AIDS.

These sizzling, sensuous self-created divas are channeling their high-voltage energy for Viva Glam and igniting ‘From Our Lips’ - the new MAC Cosmetics Viva Glam campaign. In honour of all of the women who are living with the HIV/AIDS virus, and those working to curb its spread, the MAC AIDS Fund will announce $2.5 million in donations to fund model programs that address the vulnerabilities and inequities that place women at increased risk for HIV/AIDS.

"We're raising the Viva Glam bar this year with the voices of two incredible artists. Lady Gaga and Cyndi Lauper are bringing women's issues to the forefront of the HIV/AIDS crisis. We have one artist that hit the music industry at the beginning of the HIV/AIDS epidemic in the 1980s, and another that is explosively popular with young people today. They represent different generations that are equally as affected by this disease, and both are helping to spread the message of the power of one lipstick." said John Demsey, Group President, Estee Lauder Companies and Chairman, MAC AIDS Fund.
House of Numbers Anatomy of an Epidemic at 12:57 PM 1 comment:

Made Up Phenomenon: Can 'super bananas' tackle HIV?

The Donal MacIntyre team investigates reports that a substance in bananas called "BanLec" could be as effective as some anti-HIV drugs.
Reporter Bob Howard's suspicions about the truth of these reports were confirmed when he spoke to Professor David Markovitz from the University of Michigan whose research into bananas was being cited.
Donal MacIntyre was broadcast on BBC Radio 5 live on Sunday 21 March 2010.

House of Numbers Anatomy of an Epidemic at 2:21 PM No comments:

March 22, 2010
(CNN) -- Contaminated and polluted water now kills more people than all forms of violence including wars, according to a United Nations report released Monday that calls for turning unsanitary wastewater into an environmentally safe economic resource.

"At the beginning of the 21st century, the world faces a water crisis, both of quantity and quality, caused by continuous population growth, industrialization, food production practices, increased living standards and poor water use strategies," the report by the U.N. Environmental Program says.

As a result, "it is essential that wastewater management is considered as part of integrated, ecosystem-based management that operates across sectors and borders, freshwater and marine."
The report defines wastewater as a combination of fertilizer runoff, sewage disposal and other animal, agricultural and industrial wastes.

Wastewater a deadly threat. But with proper management, the report notes, "wastewater can be an essential resource for supporting livelihoods."According to the report -- titled "Sick Water?" -- 90 percent of wastewater discharged daily in developing countries is untreated, contributing to the deaths of some 2.2 million people a year from diarrheal diseases caused by unsafe drinking water and poor hygiene. At least 1.8 million children younger than 5 die every year from water-related diseases, the report says.

For example, some of the chemicals that make wastewater a pollutant, such as nitrogen and phosphorous, can also be useful as fertilizers for agriculture.
"If the world is to thrive, let alone to survive on a planet of 6 billion people heading to over 9 billion by 2050, we need to get collectively smarter and more intelligent about how we manage waste, including wastewaters," said Achim Steiner, U.N. under-secretary general and executive director of UNEP.

Despite the staggering statistics included in the report, it "also points to the abundant Green Economy opportunities for turning a mounting challenge into an opportunity with multiple benefits," Steiner said, citing reduced fertilizer costs, incentives for conserving such ecological infrastructures as wetlands and salt marshes, and business opportunities in engineering and natural resource management.

The report acknowledges that such opportunities will require large-scale investments, such as multimillion dollar sewage treatment plants.

"Financing and investment are urgently needed and must address design, ecosystem restoration construction, operation and maintenance of wastewater infrastructure," the report says.
But it also offers up simpler solutions, such as education "to ensure water, nutrients and future opportunities for employment and development are not wasted."

The report's release was timed to coincide with World Water Day, an initiative started in 1992 that aims to raise the profile of water quality. http://www.cnn.com/2010/HEALTH/03/22/united.nations.water.report/index.html?hpt=T2
House of Numbers Anatomy of an Epidemic at 2:12 PM No comments:

A BULAWAYO man from Mahatshula suburb early this week committed suicide by hanging after discovering that he was HIV positive.

One of the man’s neighbours said the 23-year-old had hanged himself from the door-frame of a house under construction.

“He was suffering from malaria and he then went to hospital for medical attention. It is there that he found out that he was HIV positive,” the neighbour said.

The man’s body was discovered by his girlfriend at the house where the two were living together on Tuesday at about 12pm.

Police spokesperson for Bulawayo Province Inspector Mandlenkosi Moyo said investigations had since been launched to ascertain the circumstances under which the man committed suicide.
“We are handling a case of a man who was found hanging from the door-frame of a house that is under construction where he was living in Mahatshula.
“Investigations are under way to ascertain the circumstances of his death,” said Inspector Moyo. http://www.newzimbabwe.com/news-2067-Man+hangs+over+HIV++status/news.aspx?utm_medium=newZimSituation&utm_source=newzimsituation.com
House of Numbers Anatomy of an Epidemic at 4:20 AM No comments:

Guess "House of Numbers" can't have an opinion on HIV/AIDS on scienceblogs.com without a Hostile reaction from the host

After we posted:View the new documentary "House of Numbers" to see why questions about this must be raised and deeper issues about HIV and AIDS need to be discussed. Lives are at risk, and this is the first documentary with the worlds foremost authorities highlights the scientific problems with HIV testing, science, statistics, and why there is no cure. It sheds new light on a misunderstood phenomena. GO to http://houseofnumbers.com/ to see the trailer.

We received this email:


From: Abbie <bluesky3@gmail.com>
Date: Tue, Mar 16, 2010 at 11:25 AM
Subject: Regarding your postings on my website
To: houseofnumbersdoc@gmail.com
Stop spamming my blog, pig fucker.

Crazy is as crazy does: EXPELLED and House of Numbers

http://scienceblogs.com/erv/2009/04/crazy_is_as_crazy_does_expelle.php
Category: HIV/AIDS
Posted on: April 23, 2009 12:45 PM, by ERV
Check out this AWESOME anti-science movie!
Am I talking about EXPELLED II: Dembskis vs the Baylor Lunch Lady?No!
Im talking about EXPELLED-except-with-HIV-D

enial movie, House of Numbers:
Youtube "HOUSE OF NUMBERS" Trailer
DIRP!
Awesomely, one of the misled real scientists, Dr. Daniel Kuritzkes, took a page from the PZ/Dawkins handbook and improved on it. Instead of just showing up at a local screening,Kuritzkes hosted a post-screening panel discussion. A panel of scientists. No Deniers. Deniers in the audience were blindsided, and lulz ensued.
You all just need to go read the whole article. 'Fans' of EXPELLED will get a kick out of it-- Creationists, HIV Deniers, anti-vax-- its all the same thing.
House of Numbers Anatomy of an Epidemic at 3:25 PM No comments:

BY L.K. REGAN
PUBLISHED MAR 04, 2010
The aggressive use of retroviral therapies has been able to bring many HIV+ men's viral load down to undetectable levels. But until now, it has been unclear whether those medications reduce the risk of infection for those men's sexual partners. Now, a recent study from Australia specifically quantifies how likely a man is to contract HIV from a given sex act—and demonstrates that those risks are barely impacted by contemporary treatment methods.

Why should gay men look closely at these numbers? The study's authors warn that "caution should be exercised before interpreting the results at the level of individual men." But blogger and journalist Chris Crain, blogging at Citizen Crain puts a different spin on this study: "I tried for years when I edited the Washington Blade and a number of other gay publications to get this kind of straightforward info about the risk associated with various sexual acts," he writes. "We were, for the most part, stonewalled by public health 'experts' who were loathe to trust gay men with actual info, favoring instead the tired 'AIDS panic' approach of trying to scare men into using condoms by implying that any sort of sex was equally risky." In the end, more accurate information is always an improvement. http://www.realjock.com/article/1608/

House of Numbers Anatomy of an Epidemic at 2:51 PM 1 comment: