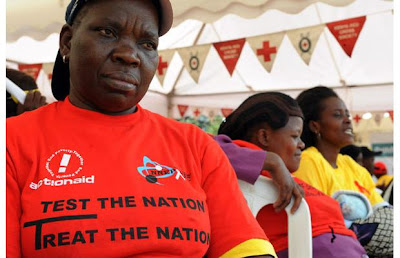 A health worker at the Kenyatta International Centre on December 1, 2009 during celebrations for World AIDS Day in Nairobi, Kenya. The United States has committed $2.7 billion to help fight HIV infection in Kenya where more than a million people are living with the disease.

NAIROBI – The United States committed $2.7 billion on Wednesday to help fight HIV infection in Kenya where more than a million people are living with the disease.

The pledge is part of the largest U.S. foreign aid program devoted to a single disease -- the President's Emergency Plan for AIDS Relief -- and has been lauded as a bright spot of former President George W. Bush's tenure.

The money, which is to be dispersed over the next five years, represents a 112 percent increase in funding for the program in Kenya, east Africa's largest economy. It is seen by the United States as an enhancement of a successful program.

"Kenya is now the biggest recipient of this program in the world, more than South Africa," U.S. Ambassador Michael Ranneberger told reporters in Nairobi.

He said the agreement with Nairobi meant the government was expected to increase direct budget support for the fight against HIV/AIDS by a minimum of 10 percent annually.

Kenyan Finance Minister Uhuru Kenyatta said the effect of the HIV virus and AIDS on the Kenyan economy was great.

"Studies done assessing the effect of HIV/AIDS on economic growth in Africa show that we lose about 2 percentage points in terms of growth. This is due to the negative impact of HIV/AIDS impact on productivity of labor," he said.

The program will include caring for more than 550,000 orphans and vulnerable children, as well as helping manage other related co-infections such as Tuberculosis, Kenyatta said.

Sub-Saharan Africa accounts for 72 percent of the world's AIDS-related deaths with 1.4 million last year, while an estimated 1.9 million people in the region were newly infected with HIV.
In Kenya, AIDS-related deaths have fallen by 29 percent since 2002.