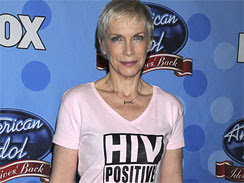 In her recent American Idol related appearance, where Annie Lennox's performance could be watched live via satellite, she wore a 'HIV Positive' black t-shirt which surprised her fans. People has started speculating that whether Annie have AIDS.

She has been advocating HIV/AIDS treatment and prevention since long. Lennox introduced a four year old little girl with HIV and pneumonia during her Idol Gives Back appearance. The girl’s mother had died from AIDS, leaving her an orphan. She urged the people to support the helpless and vulnerable.
Annie along with the SING Campaign will be supporting the Love Is All We Need Dinner and Auction on World AIDS Orphans Day which falls on 7th May 2010.

The campaign was started by Lennox after she heard that Nelson Mandela has described the African HIV pandemic as ‘genocide’, which is targeting mainly women and children. About 2 million dollars have already been raised and will talk about her ongoing battle against the HIV/AIDS epidemic at the dinner. She will also narrate her experiences in South Africa.

Annie said, “Access to treatment is a basic human rights issue. People do not have to die from AIDS”.
House of Numbers Anatomy of an Epidemic at 12:56 PM 110 comments: